On 14 July some people asked about the Swiss data.  According to the latter, Switzerland has reclassified some patients.  No information is available to date.  We had contacted the OFSP without reply to date.

What we can say is that the source used for the Johns Hopkins University analysis reports the following information: 1968 deaths for Switzerland to date.  According to OFSP data there are 1,688 deaths in the graph presented, but there is also a note that explains that 158 cases were not represented due to missing data. As a result, there is a difference of 280 deaths between the two databases.

By comparison Johns Hopkins reports 30,032 deaths for France and Public Health Organisation (santé publique)  has 30,029 deaths.  A discrepancy of 3 deaths at the date of publication.

Given that Johns Hopkins uploads almost real-time data from various countries, the prevailing assumption is that Johns Hopkins' data is correct. Unless the OFSP's factual and substantiated response is based on the differences in 280 deaths, the data used appear to be reliable.  The OFSP contacted us on 16 July with a message and we asked for clarification to understand the discrepancies and reclassifications made as there appears to be some discrepancies in the data published.  We inform the reader that this paper is subject to modification.

Long discussions ignited the web and social networks on the role of hydroxychloroquine as a treatment against Covid-19. These exchanges often boil down to throwing in the face the results of various and varied studies. There followed an expert debate on the validity of the study and the various protocols, allowing each to be given the opportunity to advance, with a certain bad faith, their oriented arguments. Indeed, it is always possible to find an argument in favor of the result of a study if it tends to demonstrate the ineffectiveness of hydroxychloroquine, and vice versa.

When its effectiveness is not in question, we talk about its side effects. The reality is that this drug has been prescribed for 65 years (1955).  Its side effects and precautions for uses are well documented.

An almost incomprehensible debate for the French

It is becoming more and more difficult for viewers or readers to know where to turn, the debates of experts relating to points of detail so limited that we forget the essentials: there have been deaths, many too many dead and sick. While experts from a certain medical world disconnected from reality debated on television sets, other doctors were fighting with the disease without having the right to prescribe in their souls and conscience (according to the reasonably established state of science medical). The Lancet study will have caused great harm to patients since it was followed by immediate effects such as the suspension of prescription and dispensing authorizations for hydroxychloroquine. The World Health Organization (WHO)  decided to suspend the trials or to simply ban the drug from being dispensed. Switzerland did the same around the 27th of May, 2020.

The fraudulent study was withdrawn from the 4th of June, but Swiss patients remained deprived of this treatment until the 11th of June, "The OFSP decided to lift the measures put in place for its prescription and dispensing. The Plaquenil® and Zentiva® Hydroxychloroquine can be re-ordered directly from the wholesaler. ” According to the critics of hydroxychloroquine, these 15 days of prohibition should have had no impact on patient survival, but this is not the case: it is enough to look at the evolution over time of the proportion of deaths among newly resolved cases, only to find that hydroxychloroquine, the only molecule banned within this time, works.

It was enough the collaboration of three internet users to solve this enigma (see the article “story of a discovery”): the discovery of a strict temporary suspension of the HCQ in Switzerland, the nrCFR * efficiency index of treatments, the observation of a “bump” of ~ 2 weeks in this index for Switzerland, the link with the suspension, and finally the analysis concluding with the statistical significance of this correlation with a very high degree of certainty ( > 99%). All analyzes were made from international data “global time series” “Deaths” and “Recovered” from Johns Hopkins University updated every night. 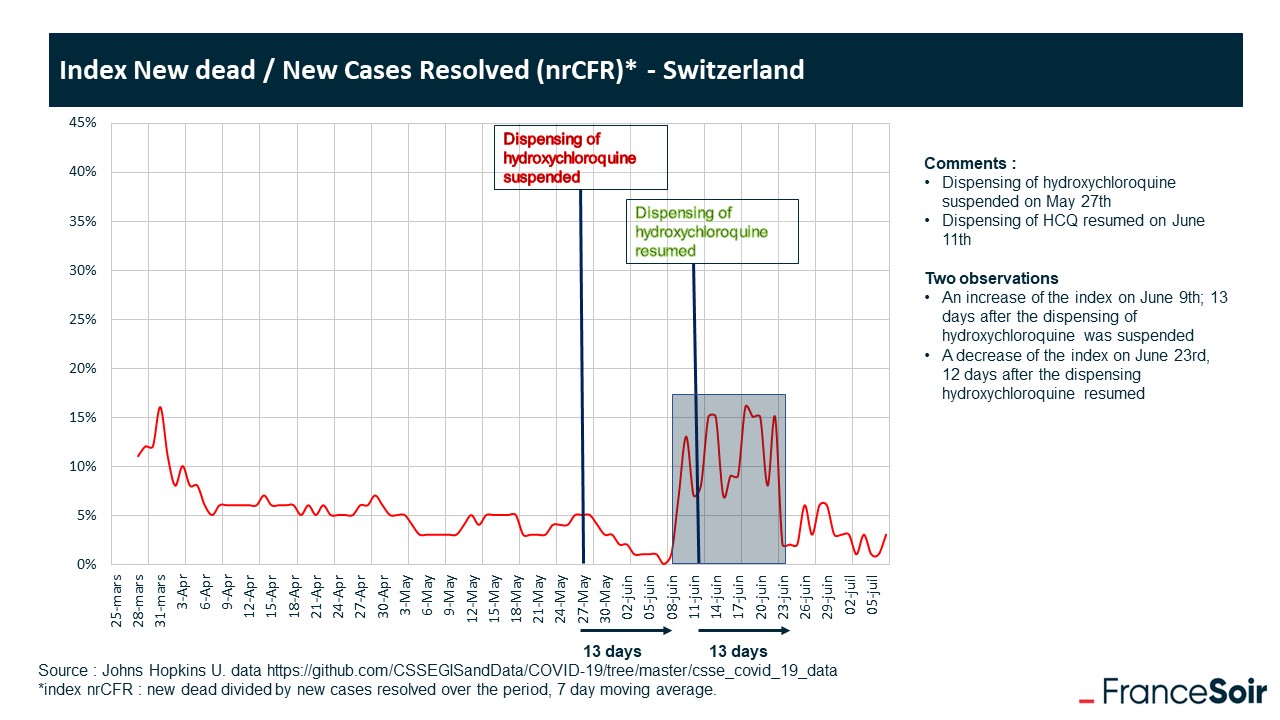 Let’s take a look at the period when hydroxychloroquine was banned in Switzerland, i.e. from May 27th till June 11th, 2020. The27th of May is 5 days after the publication of the study criticized in The Lancet , which claimed to demonstrate the toxicity and ineffectiveness of hydroxychloroquine. The consequences of this publication had a global impact, leading to the suspension of hydroxychloroquine and thus depriving many patients of treatment. This ban on the pretext of “precaution” has surely done far more harm to patients than what our health ministers have said.

Looking at the evolution curve of this index for Switzerland, we note a “wave of excess lethality” of two weeks from June 9th to 22nd, with a lag of a dozen days compared to the period of suspension of the use of hydroxychloroquine by WHO. This demonstrates, without possible rebuttal, the effect of stopping the delivery and use of this drug in Switzerland (country which follows the recommendations of the WHO, based in Geneva). During the weeks preceding the ban, the nrCFR index fluctuated between 3% and 5%. Some 13 days after the start of the prohibition, the nrCFR index increases considerably to be between 10 and 15% for 2 weeks. Some 12 days after the end of the prohibition, the lethality falls back to a lower level.

We were looking for a signal, a proof, here it is the size of a country like Switzerland. Almost the size of the Ile-de-France (Paris area)

What arguments could the Minister of Health and experts in randomized controlled studies oppose to such glaring prosaically observational evidence?

The Lancet and the World Health Organization will have served a purpose. Thanks to them!

For those who are not convinced of the observational result, we conducted a statistical difference test by comparing the three periods: May 28th - June 8th, June 9th – 22nd, June 23rd - July 6th . The period from June 9th till the 22nd is that in which the index increased some 13 days after the suspension of hydroxychloroquine. There is of course an effect of delay between stopping the prescription of the drug and possible deaths, which explains the delay of 13 days.

When testing for statistical significance between the various observations, the difference is significant at 99% with a p <0.0001. 13 days after the HCQ prescription was resumed, the index dropped to 3% and this was again a significant effect.

This index for France over the same period is found in the graph below. Note that during the prohibition period of hydroxychloroquine in Switzerland, the nrCFR index was almost identical between France and Switzerland. 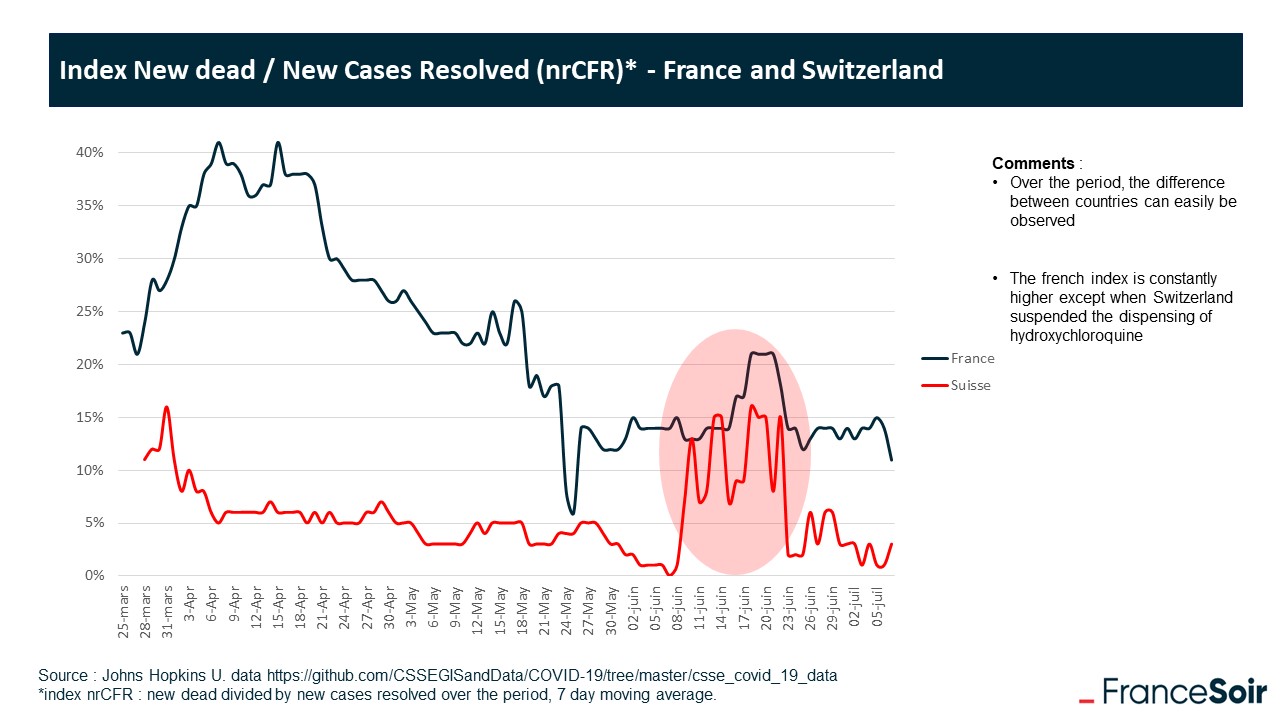 This important information should once and for all make everyone agree.

the nrCFR index was created by Michel Jullian.